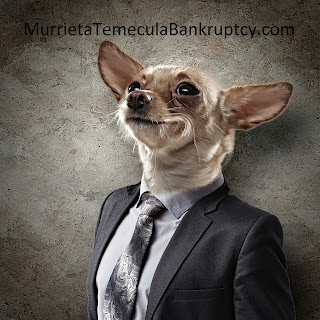 Protection of the Automatic Stay when filing your Chapter 13 Bankruptcy is a much better solution than signing up for a traditional debt consolidation. The Automatic Stay is a Temporary Restraining Order prohibiting Collections!  The order comes from a federal court and therefore preempts or supersedes state laws allowing creditors to collect.

A Debt Consolidation program, is a wish and a phone call to beg the creditor not to sue you while you are in repayment.  While most creditors will play along, there are many that will not.

A Debt Consolidation is a mangy dog begging for scraps at the doors of justice.  “Stay Boy! There’s a good doggie!”

When your chapter 13 bankruptcy payment plan is completed in 3 to 5 years, your temporary restraining order is made into a permanent injunction called your Discharge Order. Even better these Court Orders have teeth.  If a creditor violates one of them whether during or after your bankruptcy, you can sue them in the bankruptcy court and they have to pay your attorney to sue them to get them to back off or even pay you back. When you hear the word “stay” think of the word “stop”.  The Automatic Stay stops foreclosures, repossessions, wage garnishments, bank levies, creditor harassment and driver’s license suspensions.  Debt Consolidations do not provide the same protection as that of a Federal Court Order.  Debt Consolidations can possibly help you reduce your interest rates if you beg.

Chapter 13 Bankruptcy forces your creditors to work with you and your attorney whether they like it or not.  While in debt consolidation which is voluntary, some of your creditors aren’t going to work with you.  The debt consolidators pretty much know which ones and under what circumstances they won’t work with you.  The debt consolidators that have been working the deal for a while should already know which ones are not going to play along.  But for some reason, they never tell you:    “Oh and by the by, Equable Ascent Financial (or Asset Acceptance or Your Creditor Here) is not going to take your offer and they’re going to sue you now.  But just keep paying the monthly payment so that I can take my percentage and pay the other creditors slowly but surely while you get sued.  And I also told them that you have a new address, but oh ya, I forgot to tell you that too, even though you didn’t move or anything . . . but just keep paying your monthly payments so that I can get my monthly percentage of your payments, okay, thanks.”

The Chapter 13 bankruptcy repayment plan reduces interest rates down ZERO 0% and can reduce principal balances down to as little as ZERO 0% on your credit cards, medical bills, personal loans to private lenders, even older taxes as well.  Debt consolidations outside of bankruptcy can reduce interest rates too, so long as the creditor in question goes along with it.  On rare occasions principal balances might be reduced too for the few creditors who decide to go along with it.

Chapter 13 Bankruptcy can reorganize all of your debts, such as repaying and restructuring your recent back taxes, your missed house payments, and even spread the last 2 or 3 years on your car payments out over 5 years thereby reducing the car payments by half or more. Often even if you repay your credit cards and medical bills in full but cut the interest rate down to 0%, in every case I’ve seen, you will have a lower payment than if you go to a debt consolidator outside of a bankruptcy.